I feel very fortunate to be working with the new Canadian distributor of Asolo (http://thelalondegroup.ca/) to promote its products in Canada. Asolo is a high-end Italian boot company and they have a big following outside of N.America. Those who know me know that I only use gear that I believe in, not what I was given for reduced cost or free. If these boots were previously available I would have owned them a long time ago. Below is a link to my thoughts on my three favorite boots from them.
http://ontarioclimbing.com/Gear/AsoloBoots/﻿
Posted by Nate at 05:06 No comments:

Europe, Saas-Fee, Rabenstein, Champagny and in between.

Its difficult top believe how quickly five weeks can pass by.  I'm back in Canada and completed my third lap around the world. Its been a busy last few weeks. The Swiss, Italian, and French competitions with lots of driving and a little climbing in between. 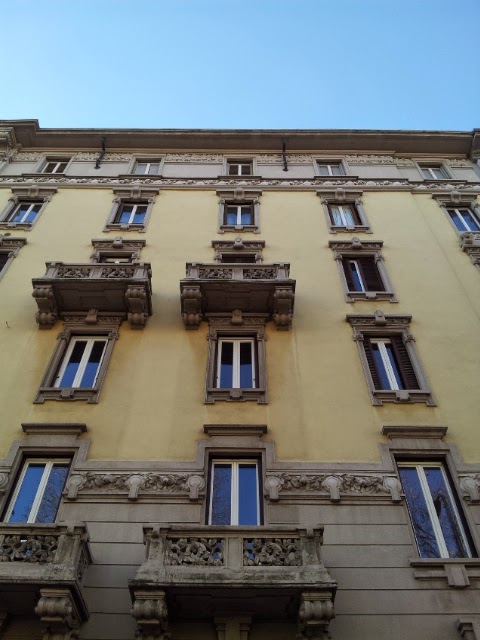 Saas Fee didn't go as well as planned and I missed semifinals. We were given four minutes to climb the preliminary route and while I used all of the time given to me, I was climbing too slow and didn't get high enough on the route to qualify. I don't know if it was the elevation, sketchy holds, still being a bit sick, or some of each. 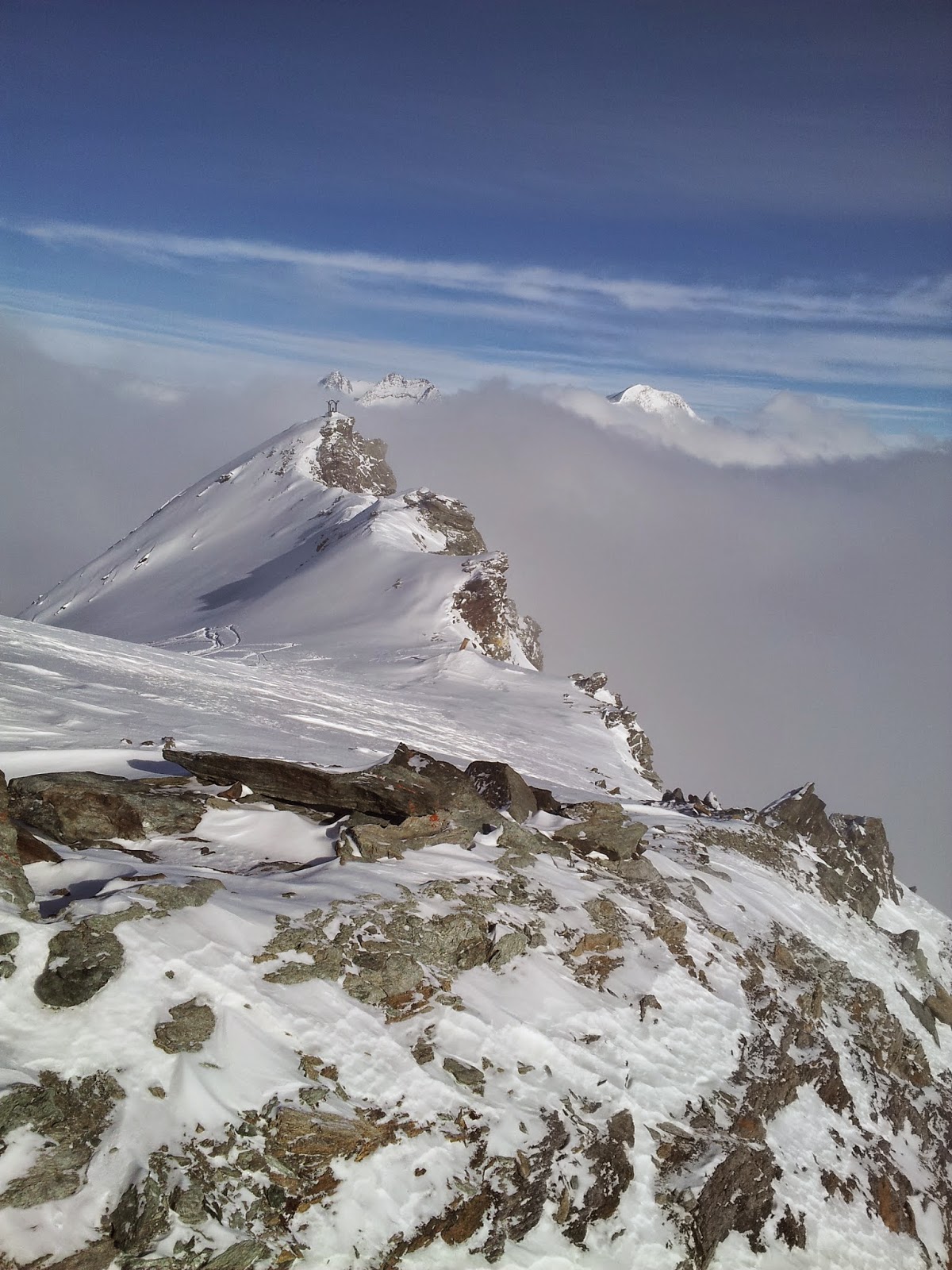 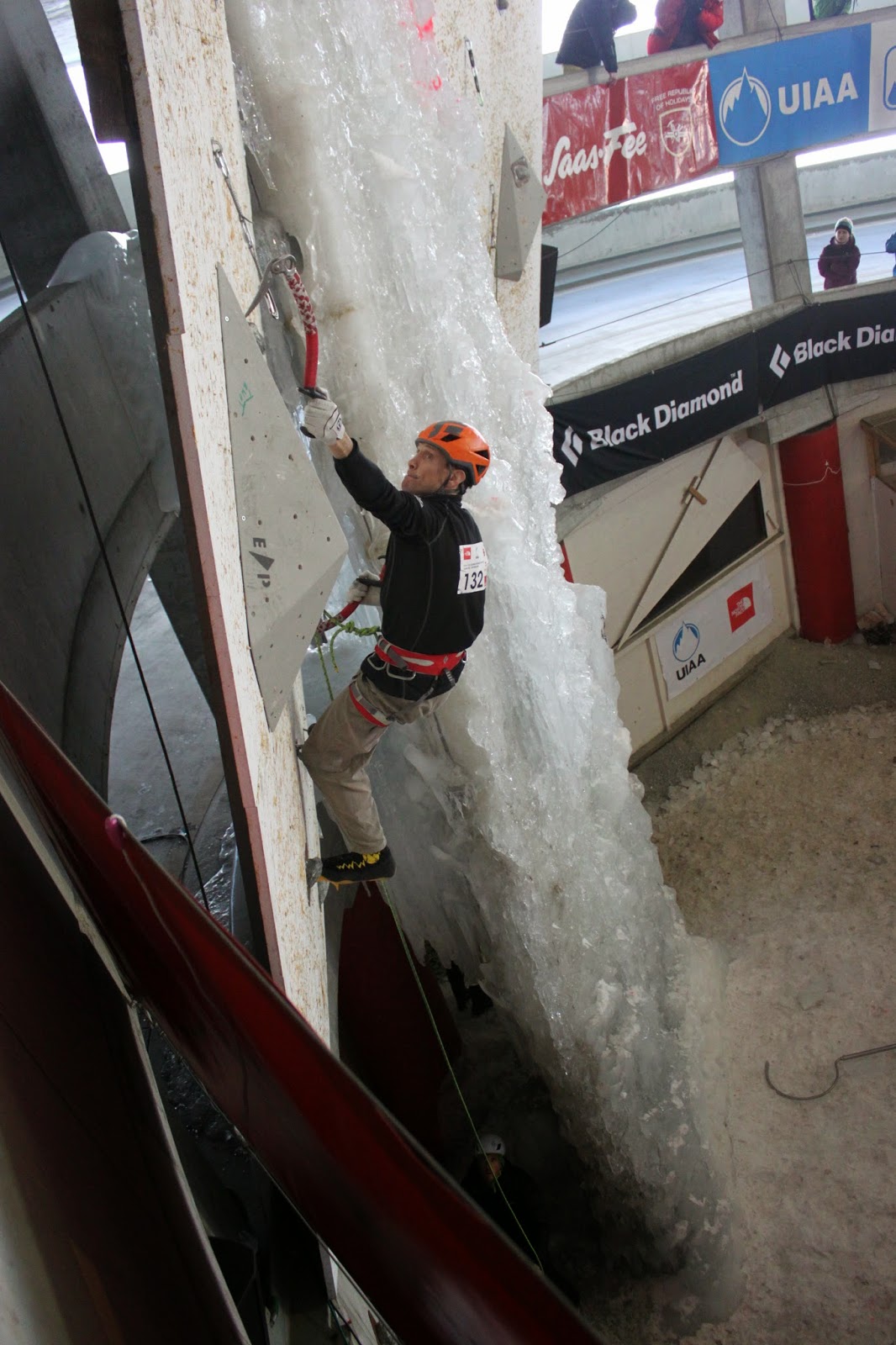 After Saas Fee it was back to France and climbing at Usine for a couple of days. Before making the long drive to Rabenstein, Italy. Rather than make the full 8 hour drive in one day, we made a couple stops along the way and got to spend a little time exploring Milan and Verona. 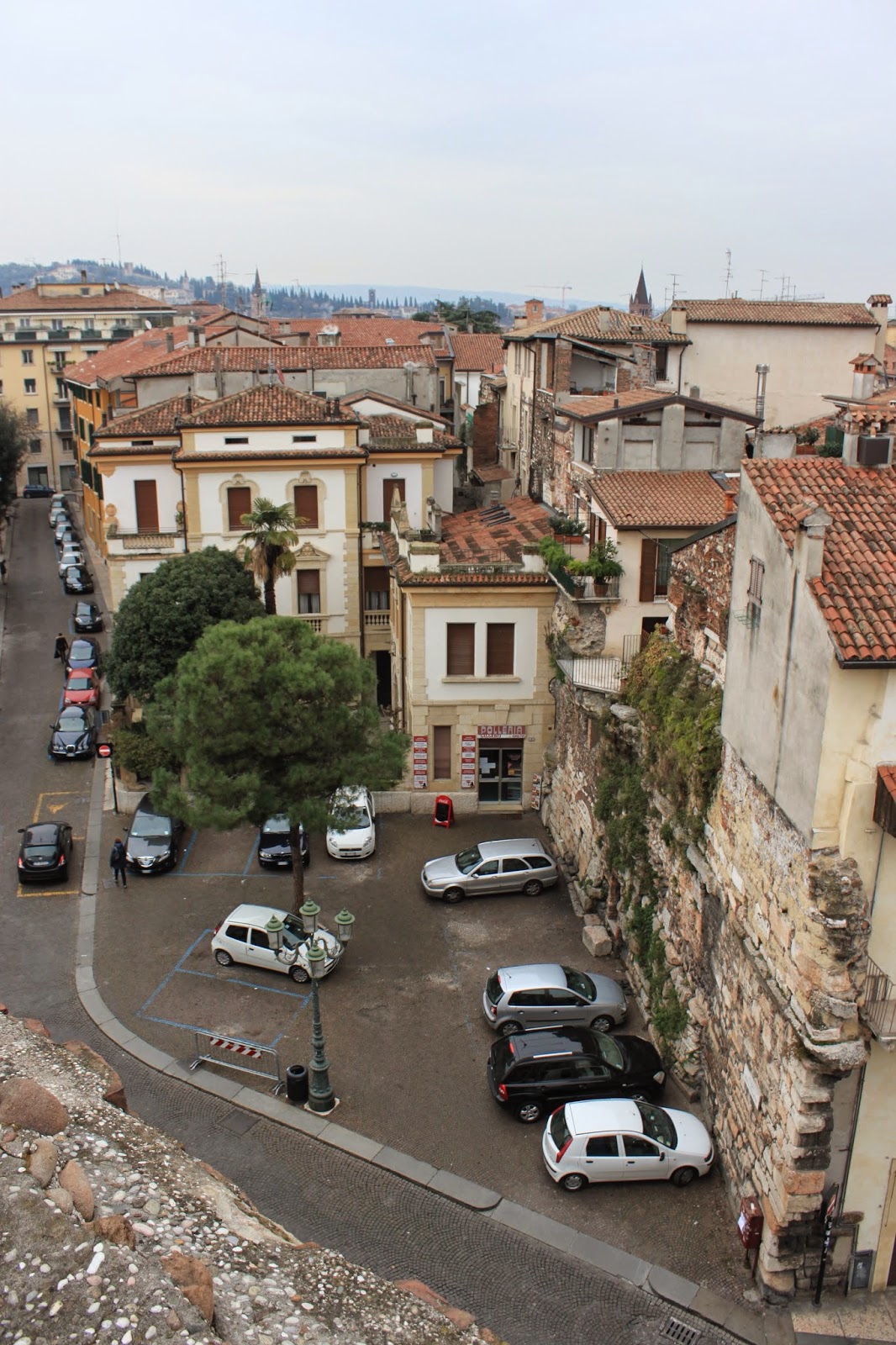 The Italy competition went okay. The Italian structure has a lot of manufactured ice bollards, which is very similar to my training structure at home. In the preliminary round I timed out, but climbed well enough to make semifinals.

The semifinal route was quite long, but the moves were slightly easier than the preliminary route.  My goal was to not fall off, which lead me to climb too slow and not push as hard as I should have. I ended up timing out just past the halfway point of the route and finished in 15th place. This was the first time I timed out rather than fall off in semifinals so I am happy in that respect. I know I could have climbed further and placed higher which is disappointing. 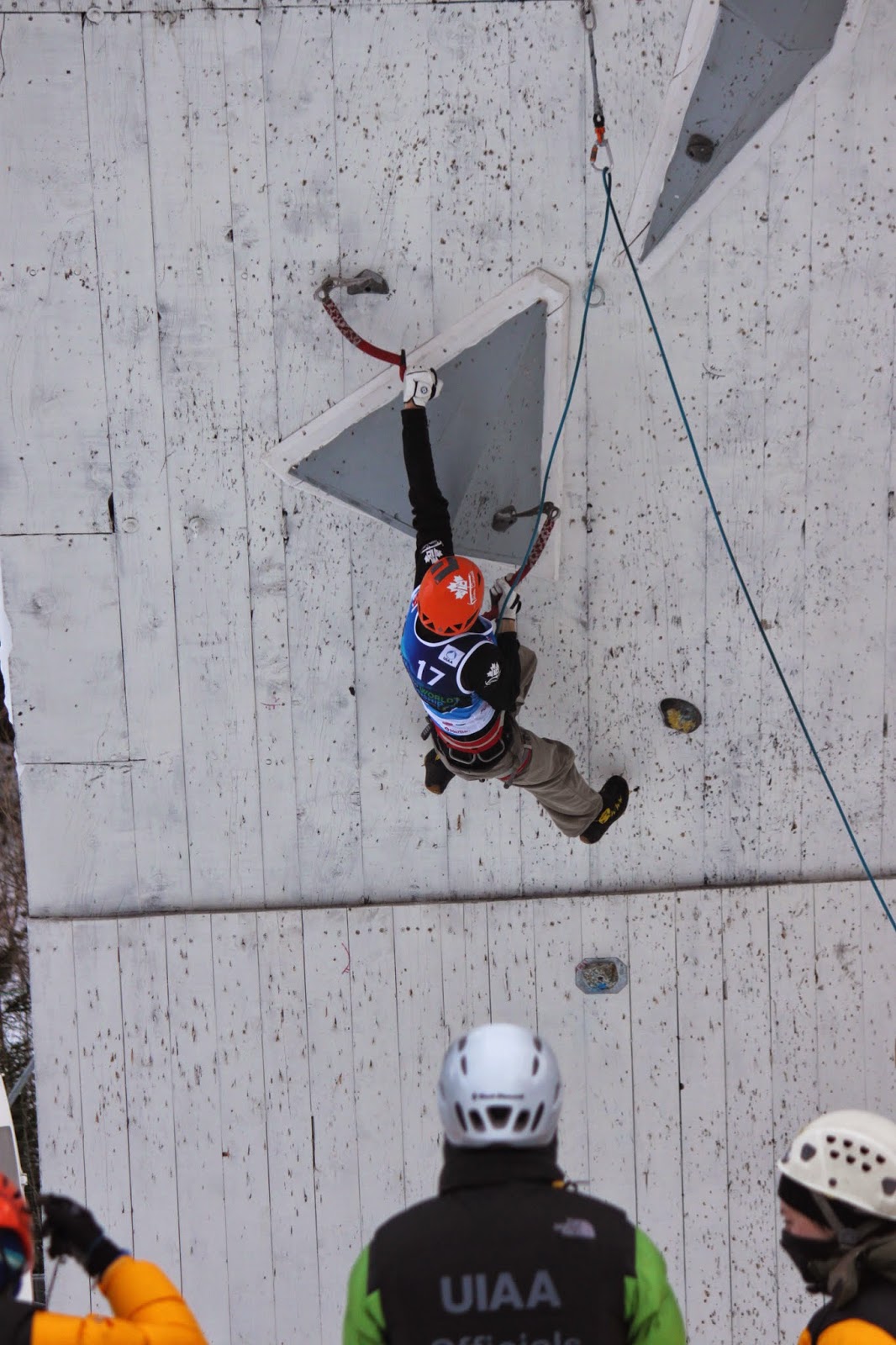 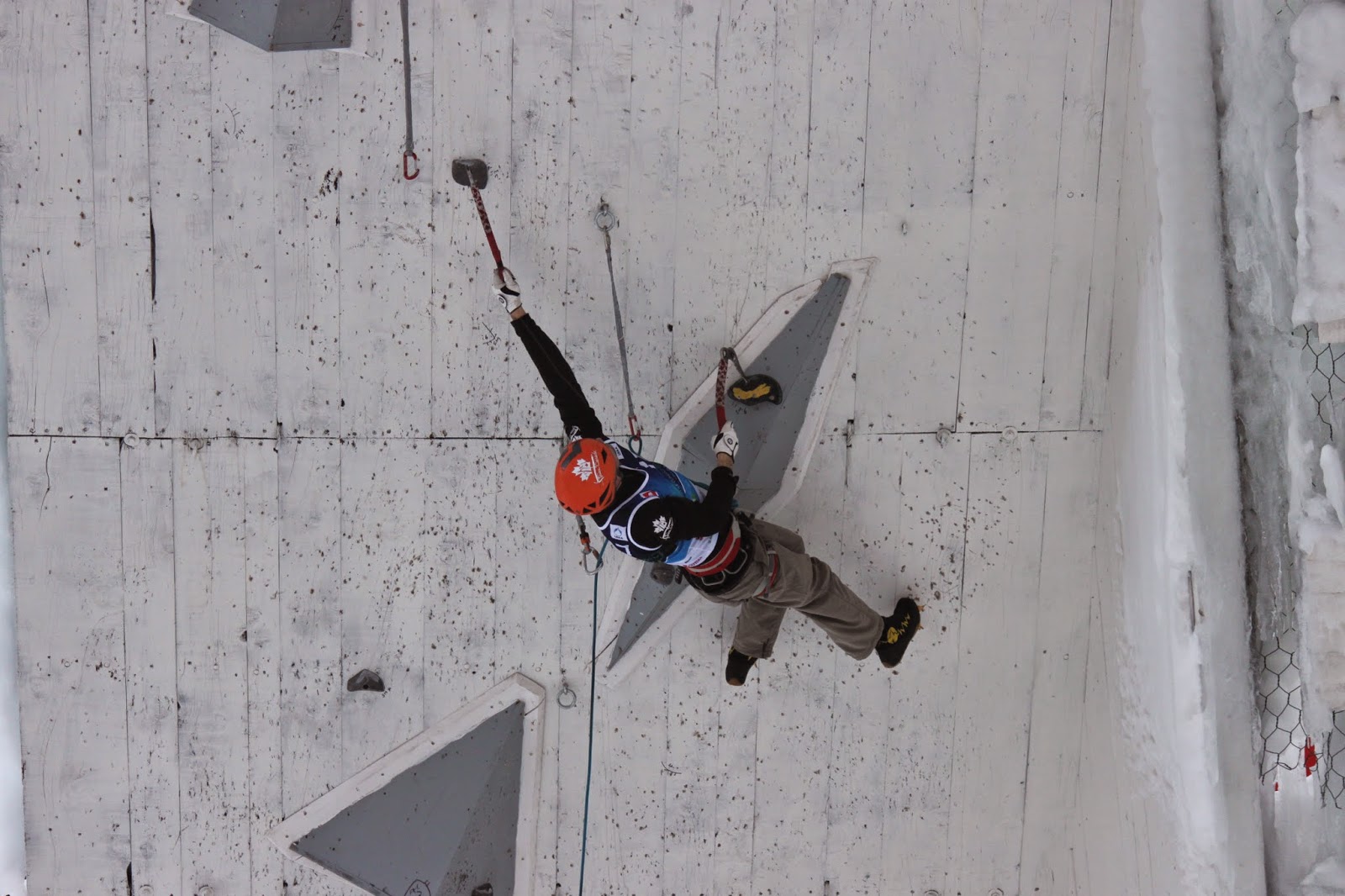 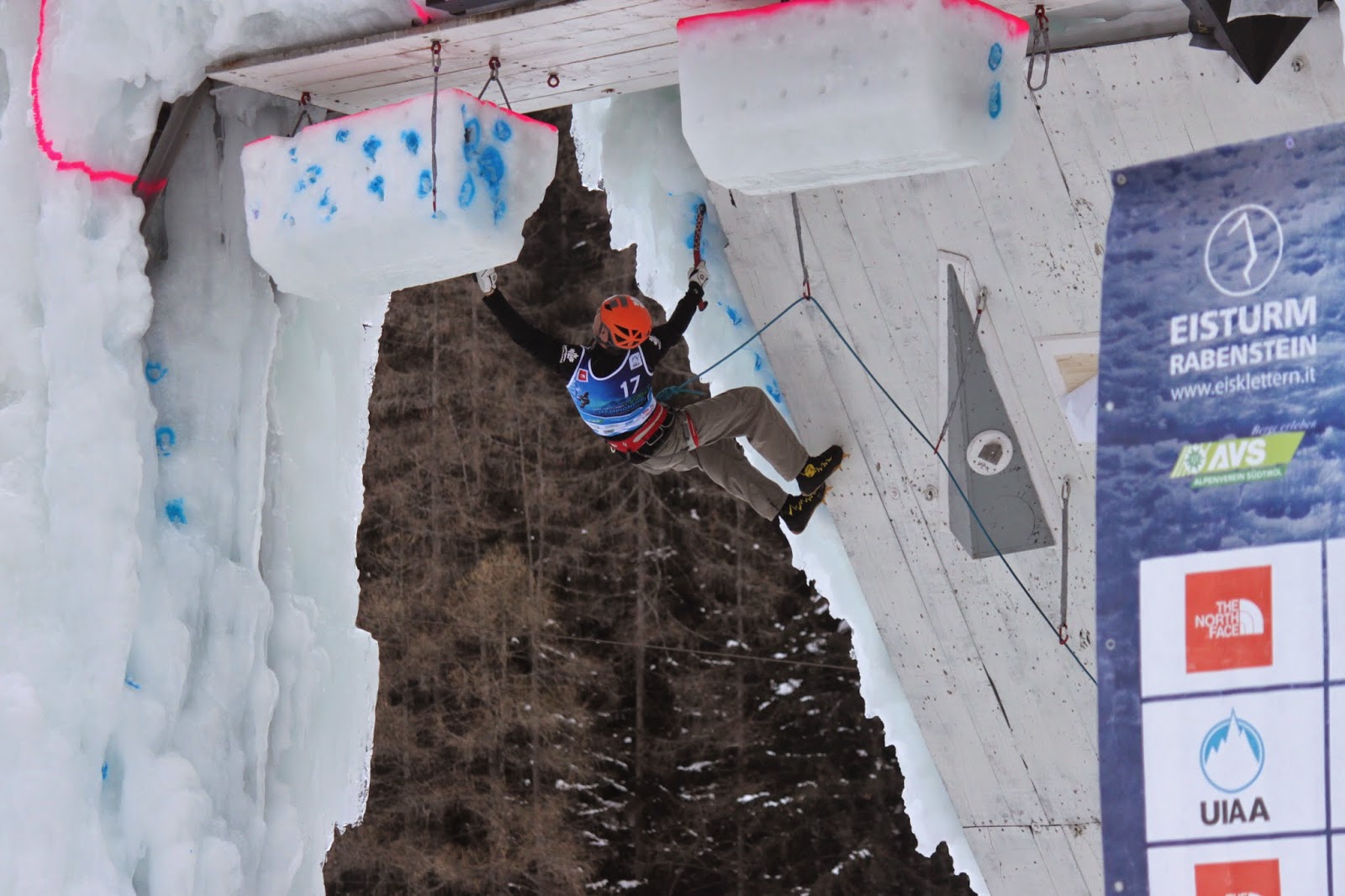 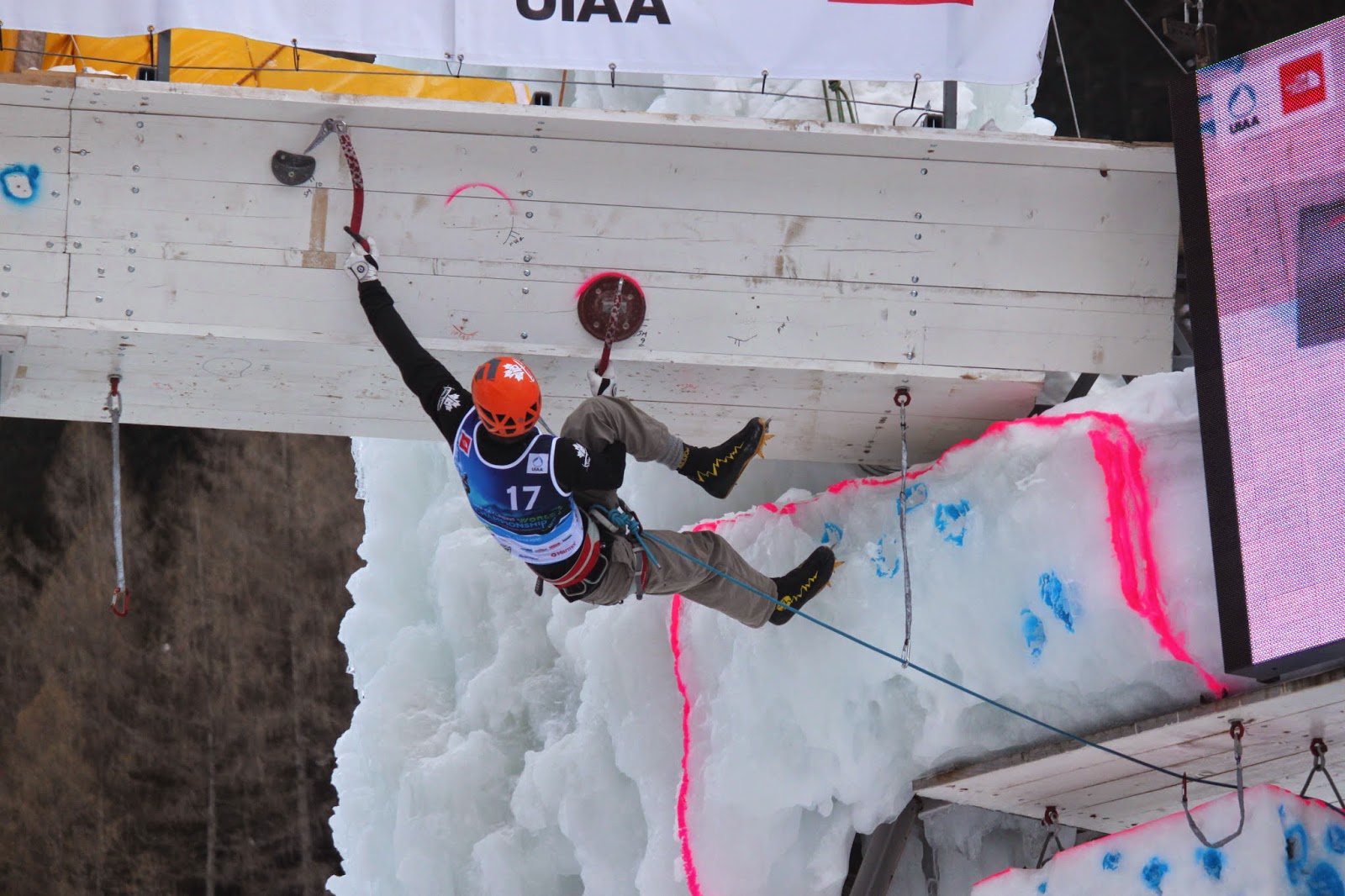 There is a short video here from the Italy semifinal and finals.


After the Italian competition we drove back to France via Switzerland. This allowed us to skip the $100+ Euros in tolls thru France and Italy, but gave us the opportunity to stop off at Eptingen and climb, as well as see something different.

I had been to Eptigen two years ago and climbed a few routes, but I hadn't tried any of the most difficult routes there. We had hoped to have a day and a half, but we had a late start leaving Italy and didn't arrive in Eptingen until almost dark leaving only one mostly full day. The cliff isn't very large, but a good number of routes criss-cross the cliff. We started on the route "Ice Man" It was the route we usually used as the warm up on the previous visit. The first time up it was a little strange because the holds were technical (a style I haven't climbed much lately) and difficult to find. Both made the route feel harder than it actually was. After a second lap on it I was felling much better and decided to get on a nice looking new route just to the left that finishes on the same anchor. From the ground I was able to see some of the holds, but not all of them. When climbing I was able to find the others, but missed one I could see from the ground, which lead to a very difficult move. I was able to climb the route first try and thought it was quite hard, until I lowered off and saw that I had missed a hold. It was good practice for me to climb this route. I new nothing about it, including the grade, so I could just go at it rather than have preconceived ideas about it.

After the good warm up I thought I should try something in the steeper, more difficult part of the amphitheater. We didn't have  lot of time left so I chose one of the easier lines. Super Gotham (D12-) looked like good line so I started up that. After climbing from bolt to bolt, finding the holds and cleaning ice out of them and off the fixed quick draws I only had a short amount of time left to try to actually climb it. I was slightly surprised when I quickly worked my way out the roof and was on the headwall leading to the anchor.  At the last bolt before the anchor I pulled up rope to clip into the quickdraw above my head. The frozen gate of the carabiner that I had worked open earlier had refrozen shut. I had to commit to continuing to climb without clipping, fortunately once the carabiner was at waist level I was able to apply more pressure and force the rope in. I was excited to complete the route, Super Gotham was my first European D/M12 and I did it very quickly. 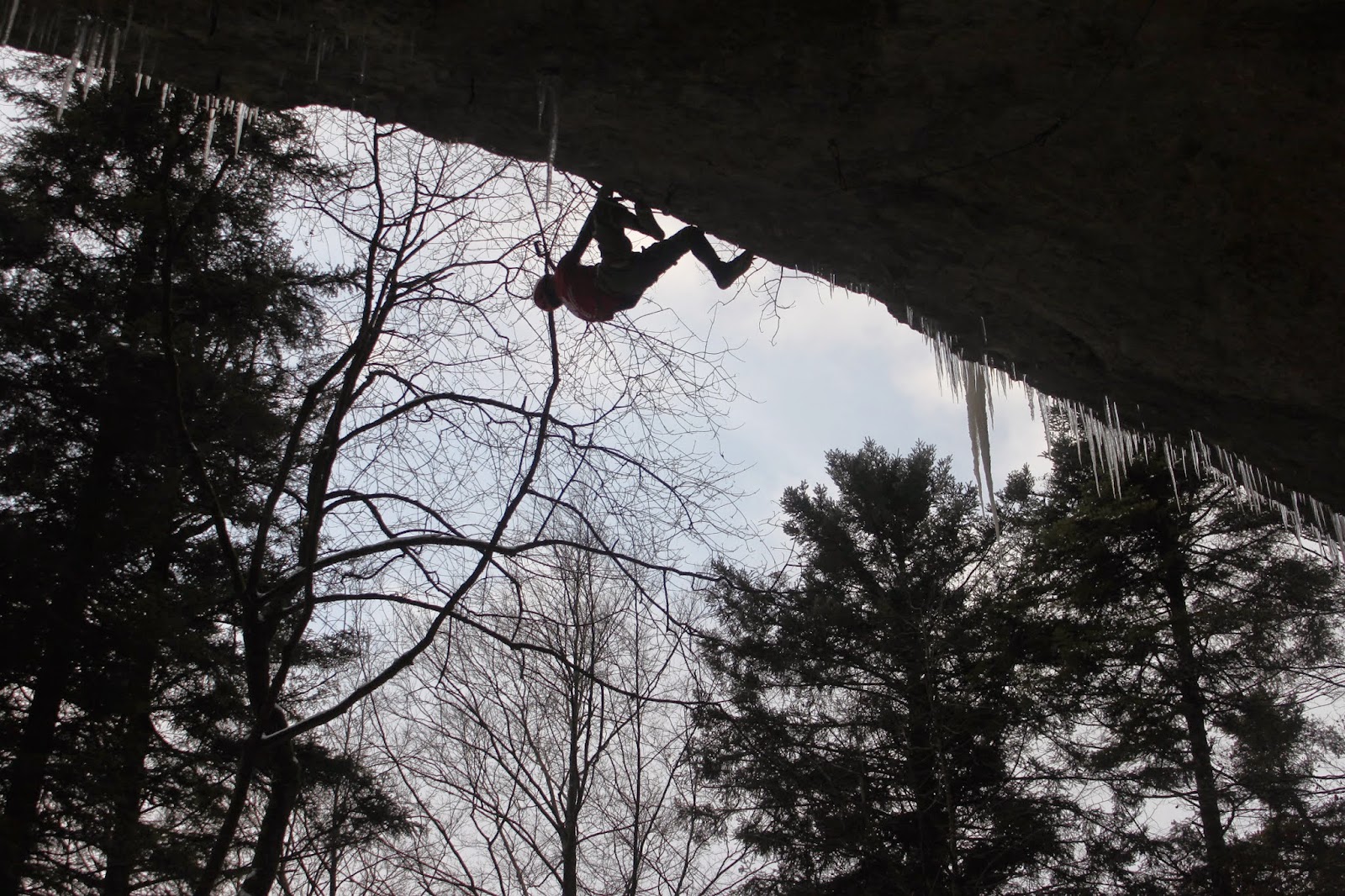 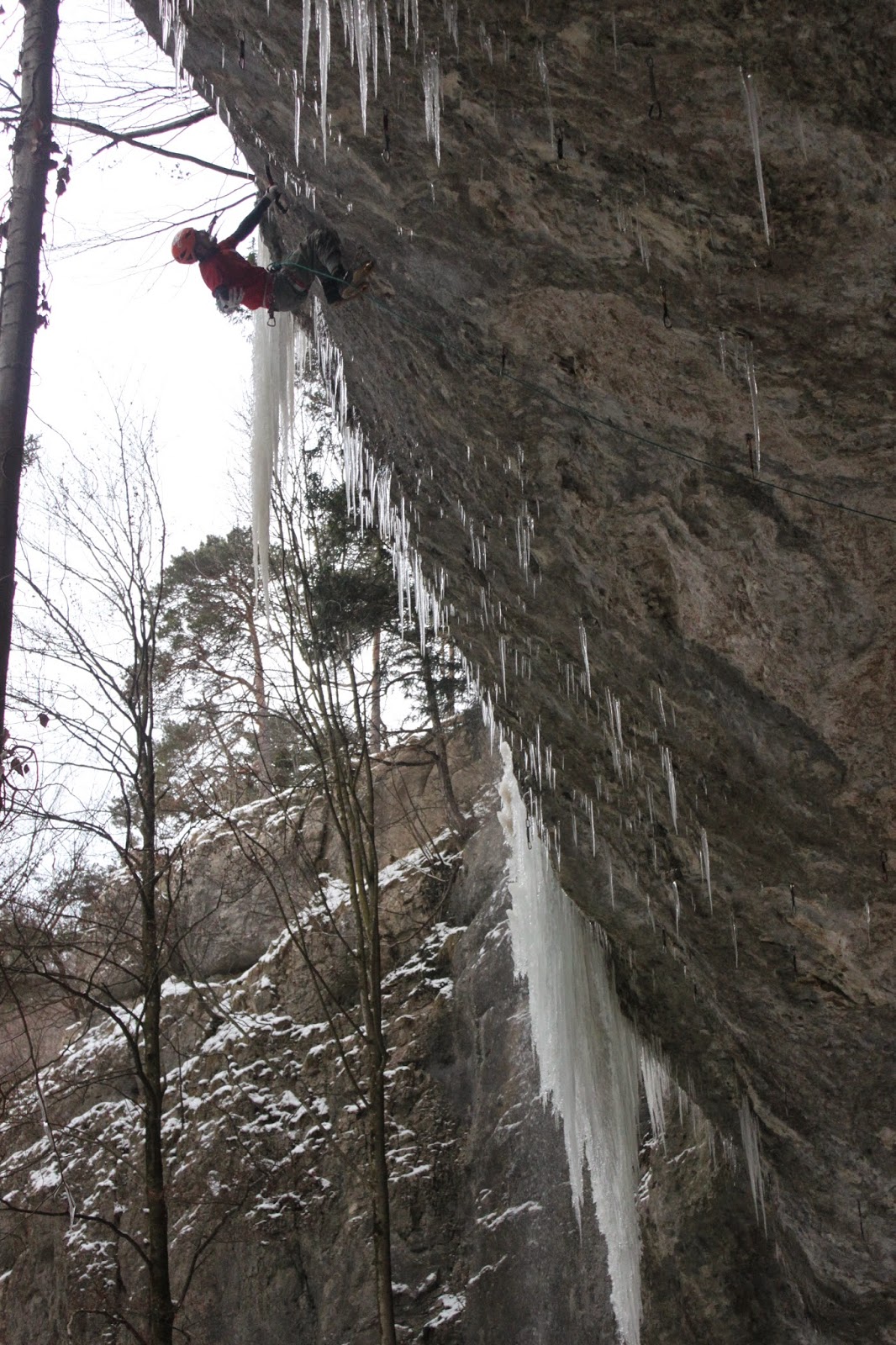 The Champangny competition was Friday/Saturday which didn't leave much time for climbing and resting after Italy. We drove back to France and our home base at our friends place in Vorreppe. I was planning to take two rest days before the competition, but Rebecca wanted to climb a little more so we did an easy day at Usine as an active rest day.

The Champagny competition did not go anywhere close to what I would have liked. After a difficult season of slips, mishaps and choke points on the routes this comp was the icing on the cake. I (along with 12 others of 29) ended up falling off low on the qualifier route on a slippery hold too close to the side of the wall. Perhaps I was moving too fast, but my foot swung to the side and there was a large section of ice that stuck out which was out of bounds and I slipped off when I swung my foot out to avoid touching it. Super disappointing, I haven't done that poorly since my first season. 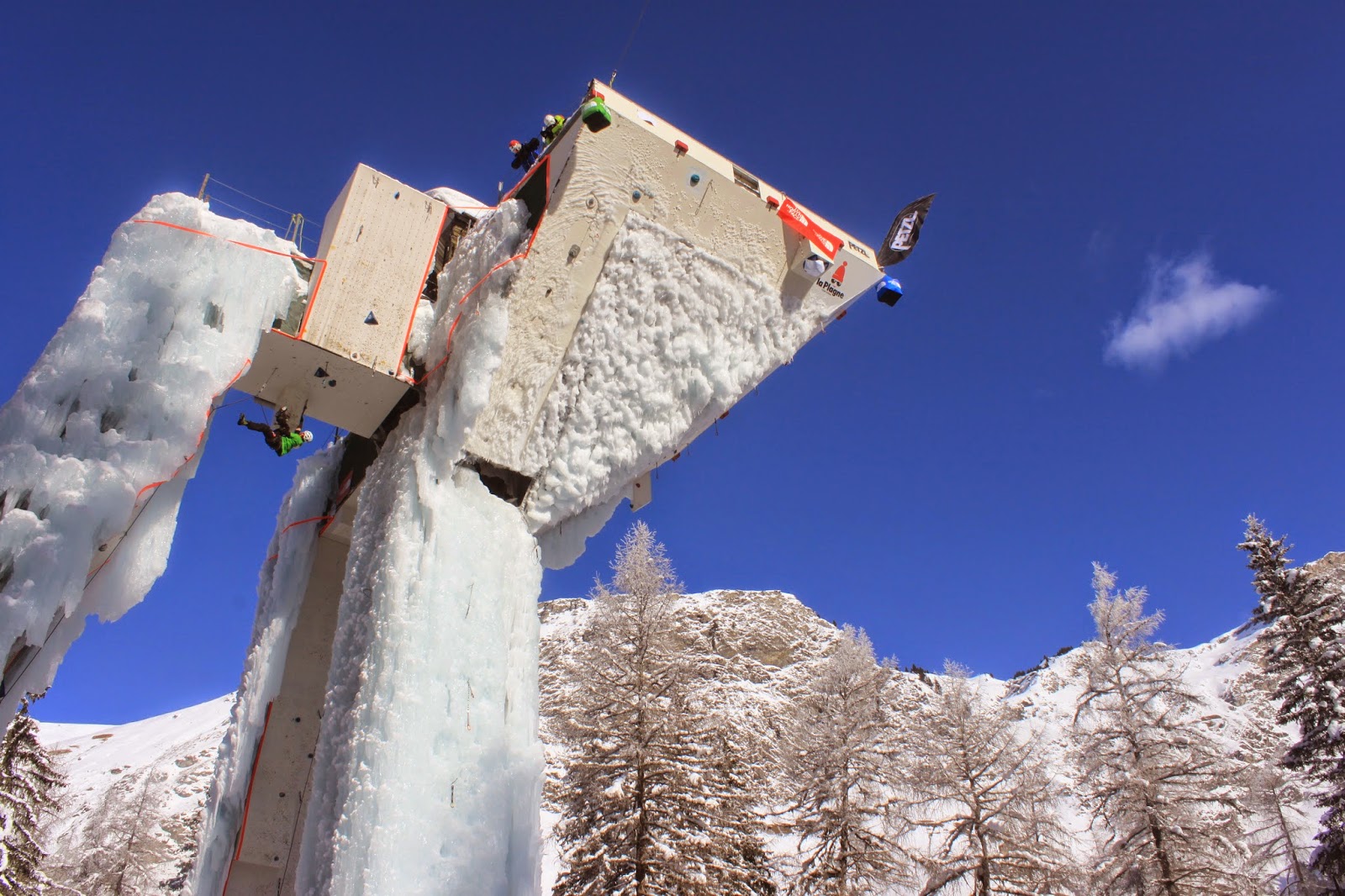 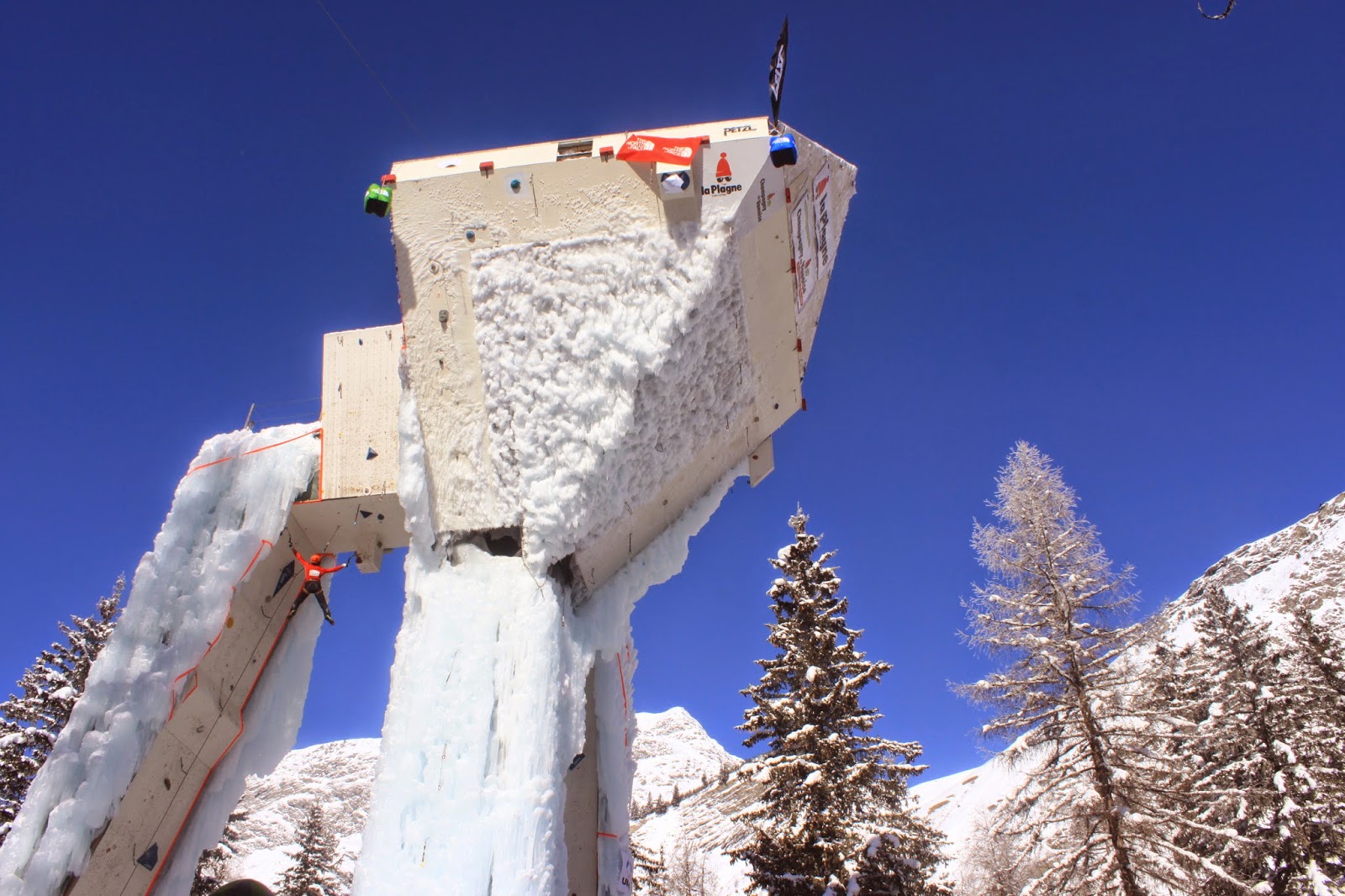 Fortunately Rebecca's route went a lot better and she got into the semifinal for her second time this season. 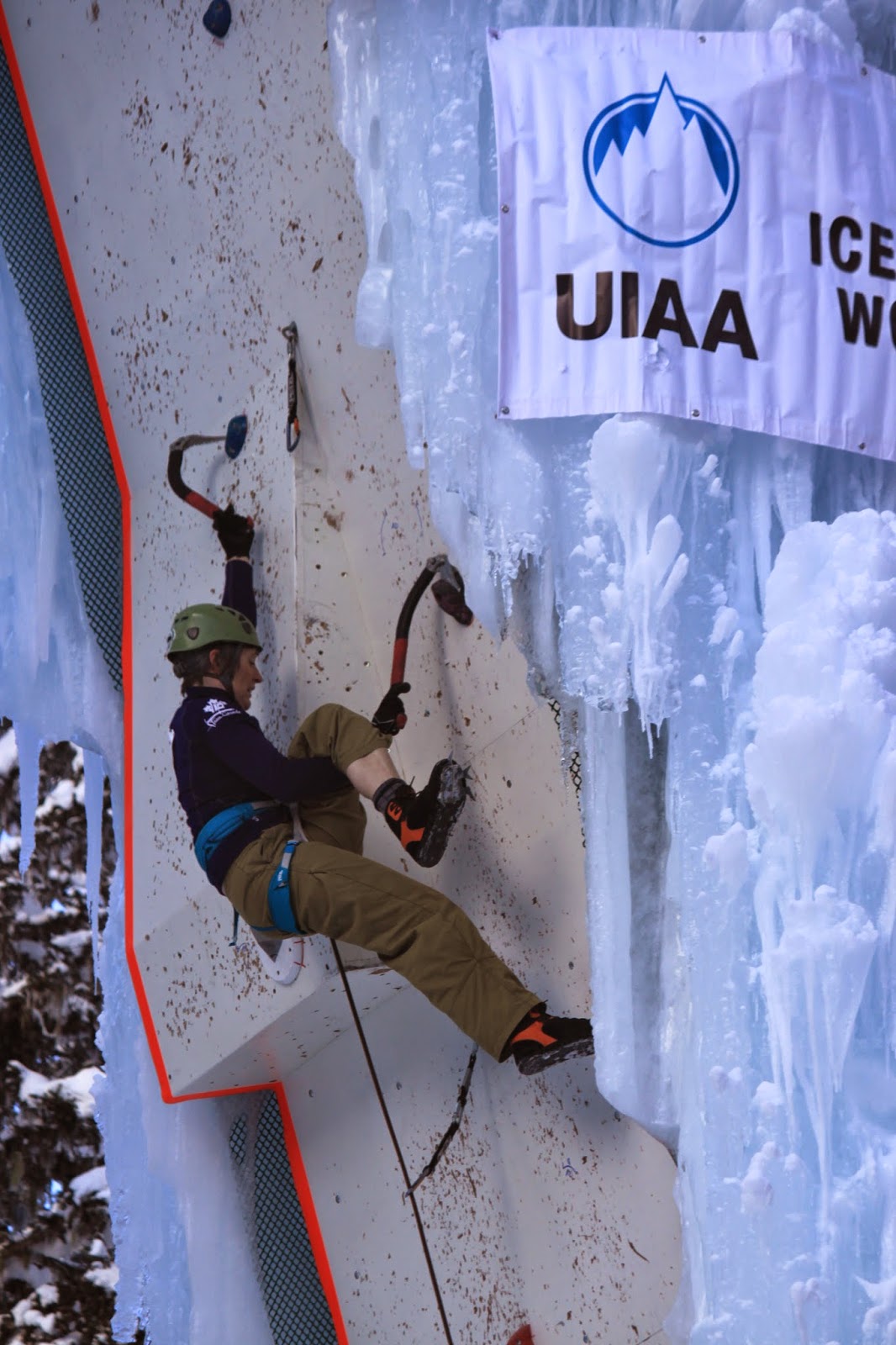 After the French competition I had a couple more days before flying home and some friends and I went back to Eptingen. We had one and half days to climb with our first day being the half. I chose The route "Spider Man" that finished on the last section of Super Gotham, which would make working the route a little faster. Once again the route required a trip up it to find the holds and clean out ice. The bottom section of Spider Man was much more difficult that Super Gotham and I wasn't sure how it would go. After pulling belay duty and resting I had enough daylight left to try the route once. I felt tired after traveling much of the day and then climbing up the route the previous time to find the holds and didn't expect too much. I quickly and efficiently climbed the starting section and got to the first hard move. It went really well and before I knew it I felt fully committed to try and climb the route clean this try. Long pulls and technical holds kept leading me upward. Before I knew it I was pumped out of my mind, but onto the finishing section of Super Gotham and somewhat easier climbing out the still horizontal roof.  A brief moment of panic set in when I was just before the sketchiest hold on the route and remembered that I was supposed to sharpen my pick before this attempt. One was sharp but the other had the tip slightly bent up which meant it could easily skate off the hold. I thought of looking to see which pick I would be taking the hold with, but decided not to since there was no way of changing tools.  With 100% commitment I went for broke and pushed on. Bent pick or not it held in the shallow divot and soon I was into good holds and less steep rock that I could actually use my feet on. A few moves more and my first D/M13 was in the bag! 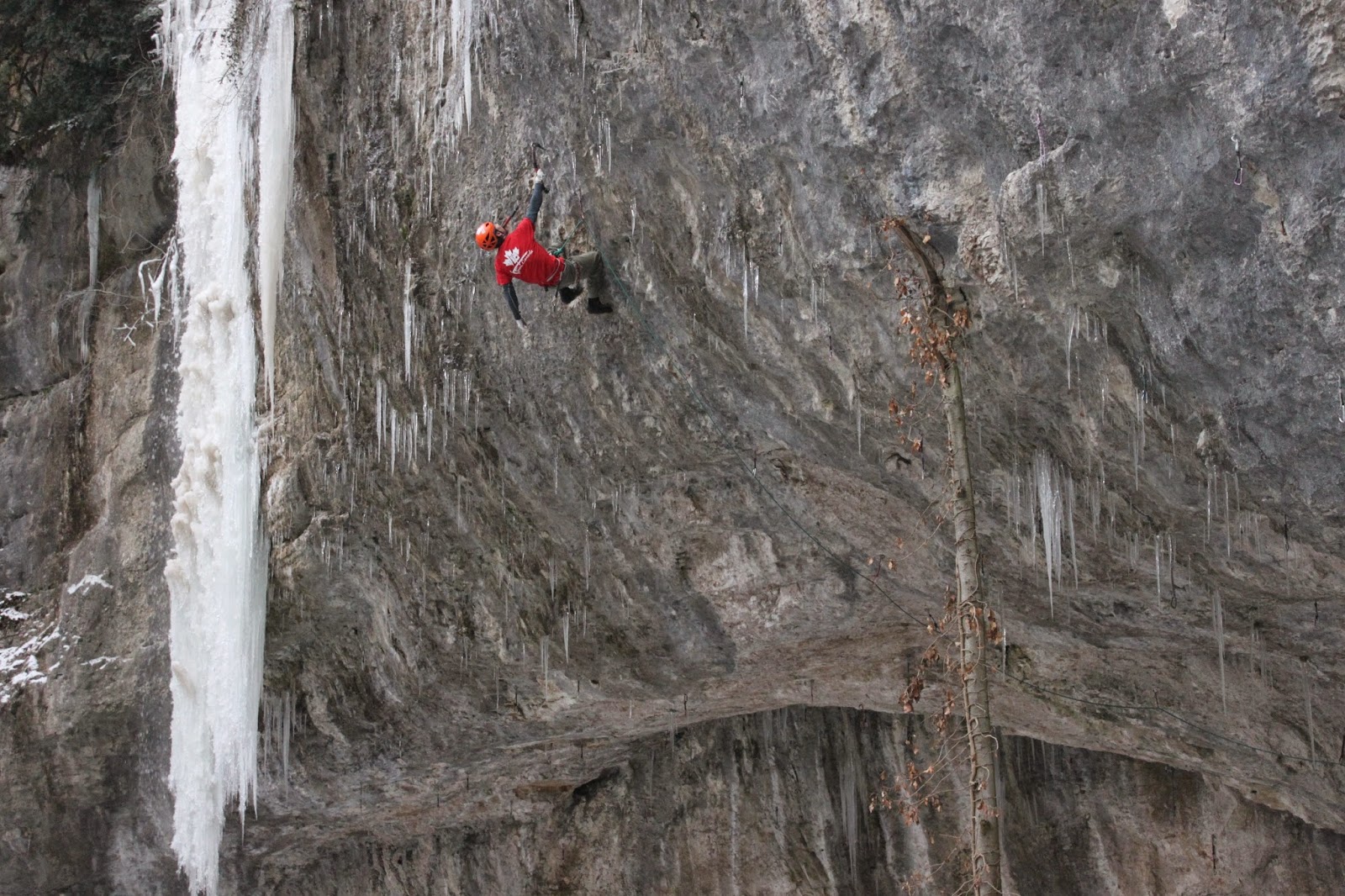 With one day left and having already climbed the route I had hoped to do at Eptingen I was unsure what to try next. My friend Gord was trying Iron Man, which is one of the hardest in the world at D14. It started on Spider Man, but continues along the roof of the amphitheater to the far side. I was able to climb up another route and join into Iron Man about halfway out the roof so I could look at the holds and try the moves of the second half without wasting time and energy on the first half. I was only able to try it once after that and have a lot of work to do before I could do it without falling. I climbed the whole route and was able to do all of the moves, but I had to hang on the rope several times to do so. The roof is about 30m long and is super physical. Hanging onto the tools for that long is hard on the skin. Because of this it would be very difficult for me to try it more than a once or twice a day. 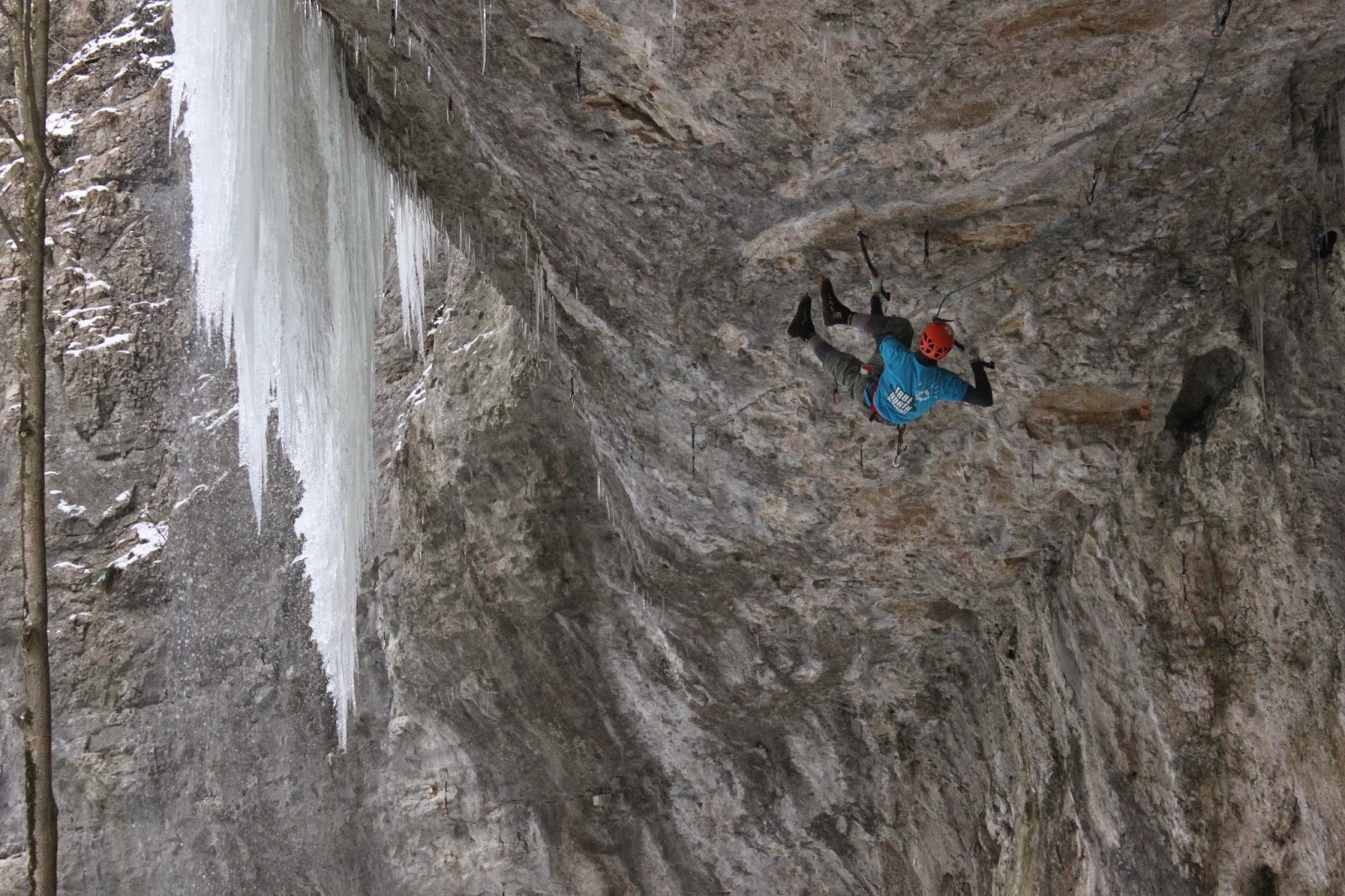 I am now preparing to go to Kirov Russia  for the 6th and final competition of this season. It's always difficult to go to this competition due to visa requirements and tight scheduling to get the visa and book flights.

I've spent the last week since Korea in Europe. The first few days in Europe I was climbing in France at a cave called L'Usine. It has one of the biggest collection of difficult dry tooling routes in the world. The cave is massive! I was here two years ago but didn't get to spent much time. On this trip I got to finish off the route "SAT" which could be one of the most difficult D8's anywhere. Originally rated D10, it was downgraded as harder routes were climbed and people became more fit. I was happy to climb it my first try this time. I'm happy to have also climbed two D10's and a D11 (L'Usine the namesake of the cliff) first try. 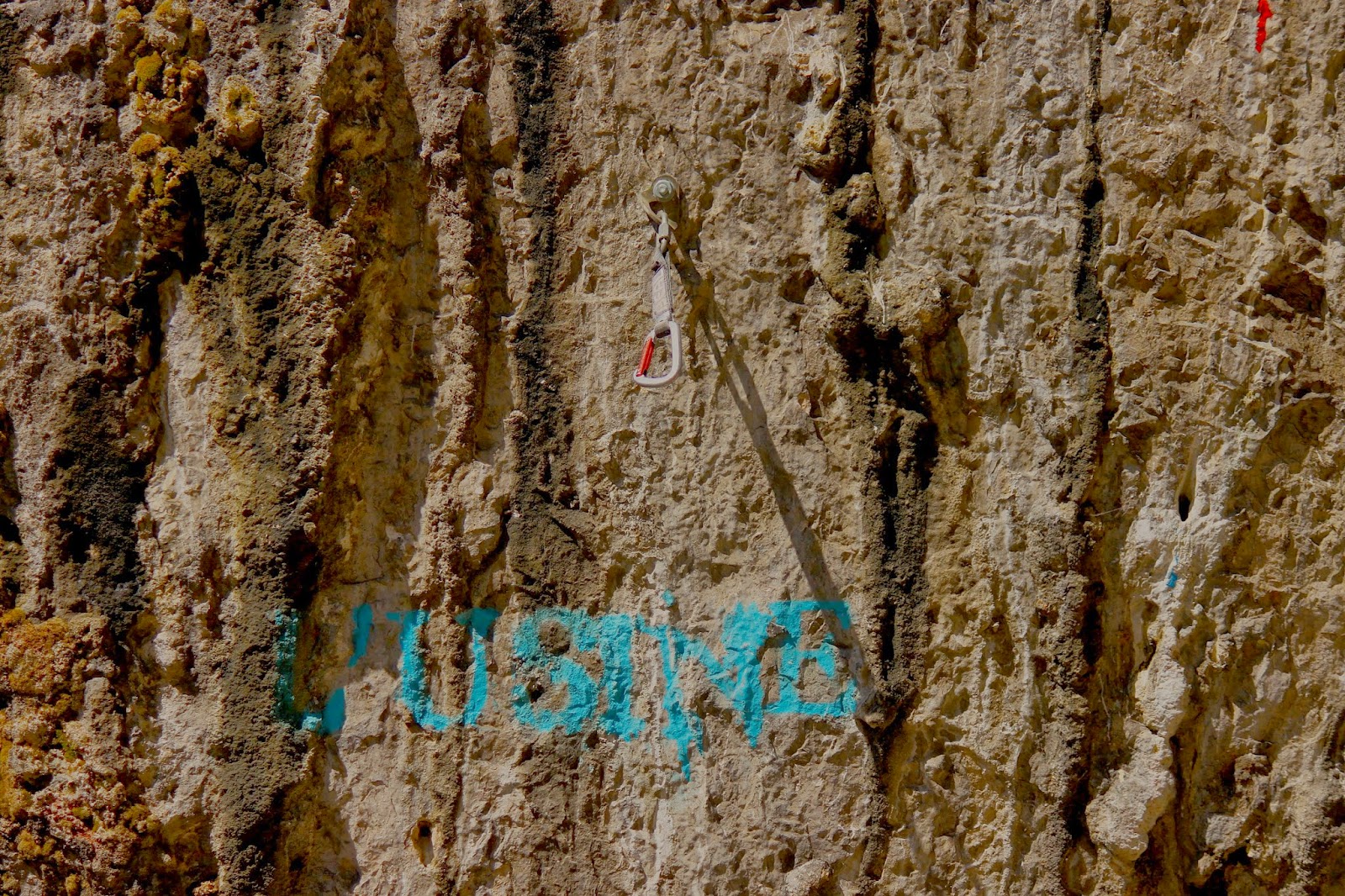 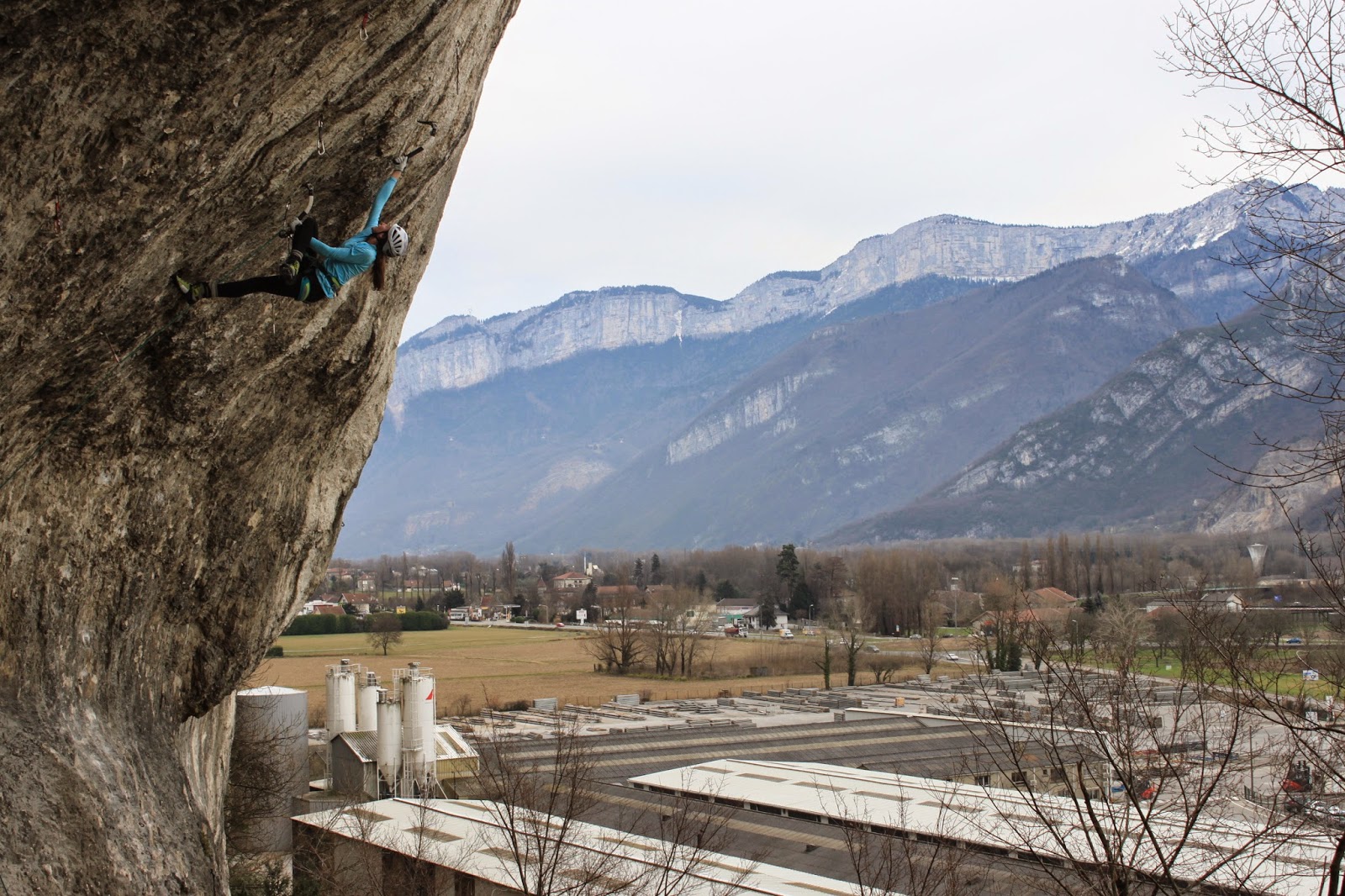 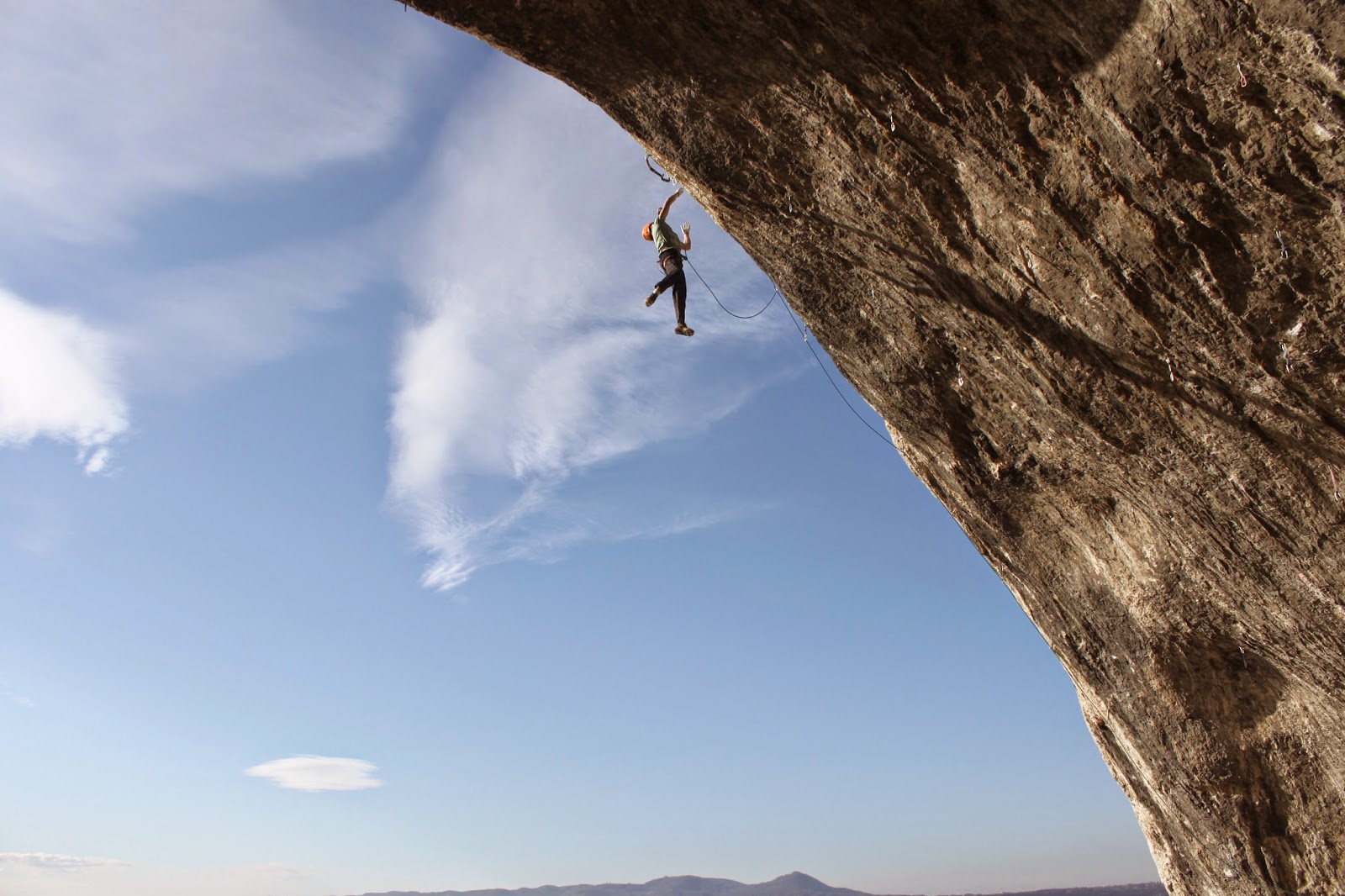 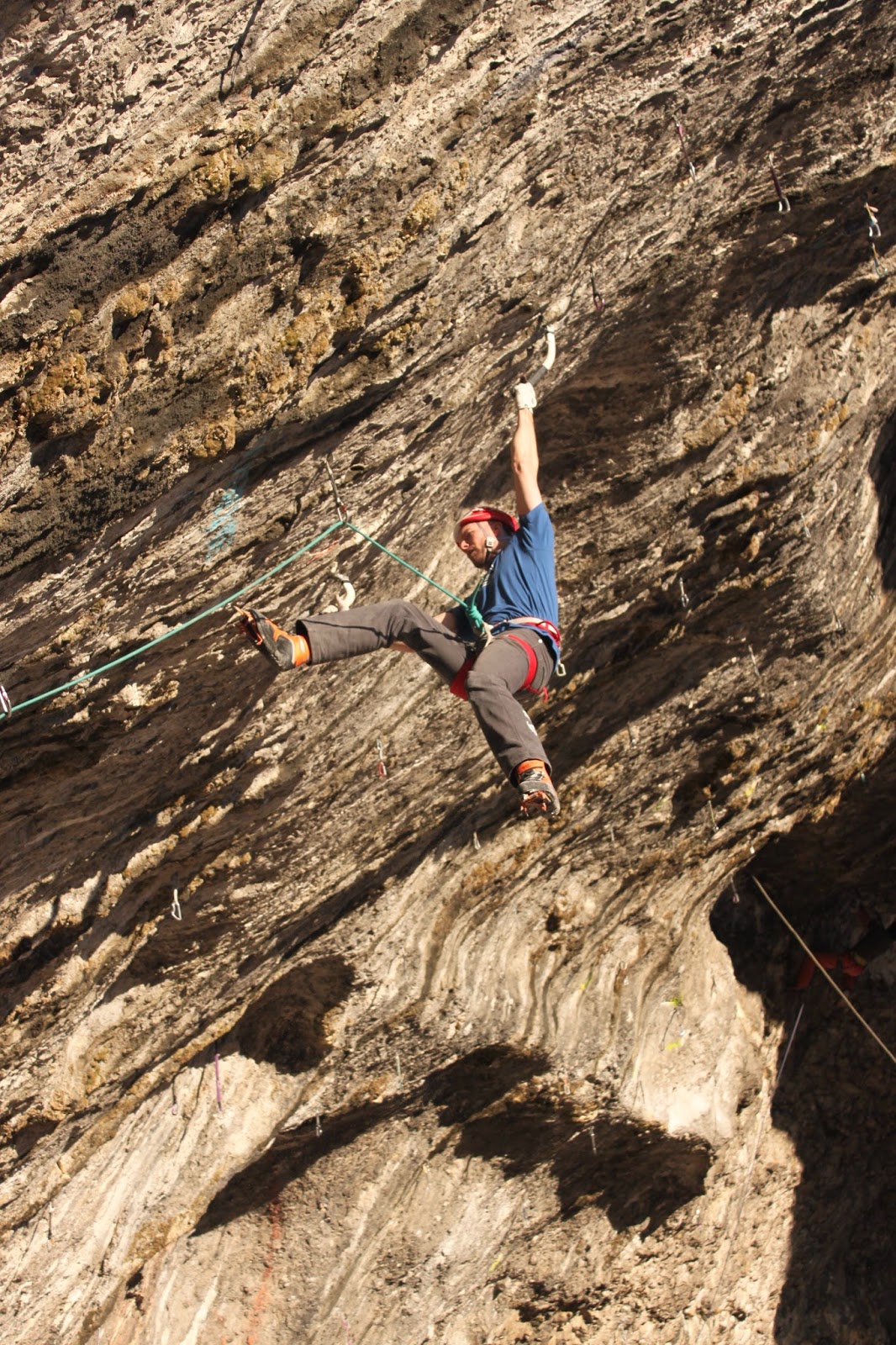 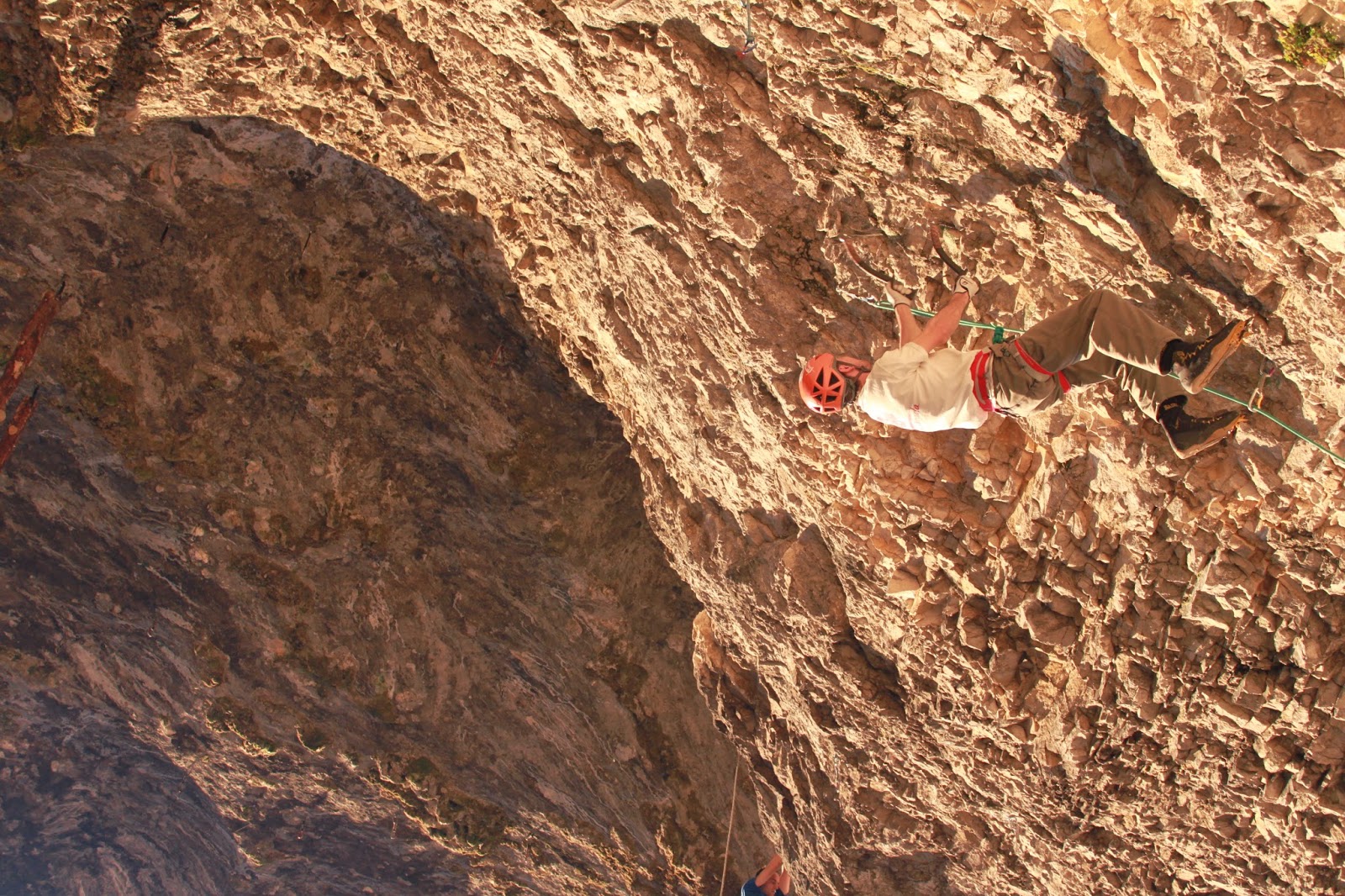 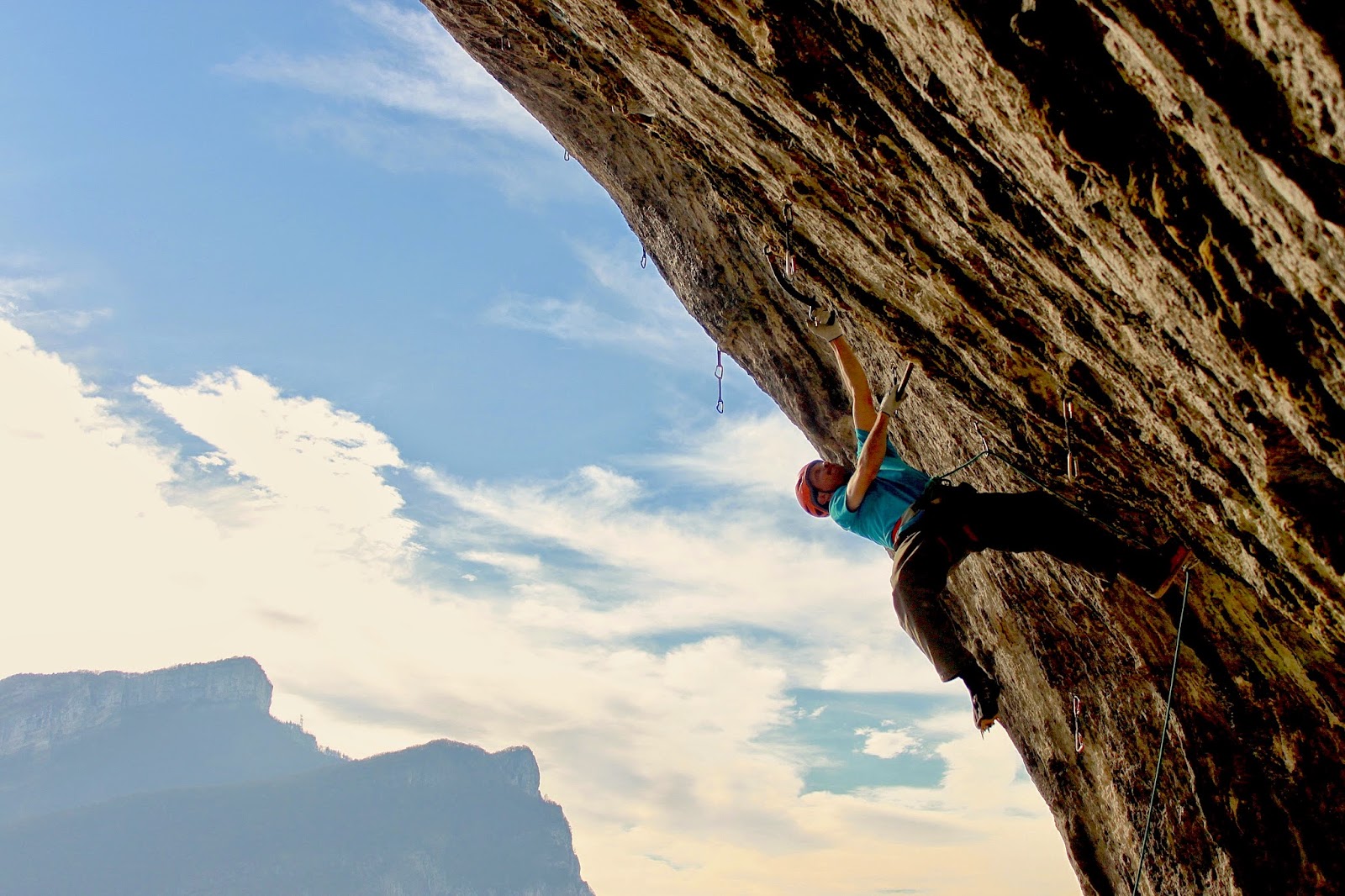 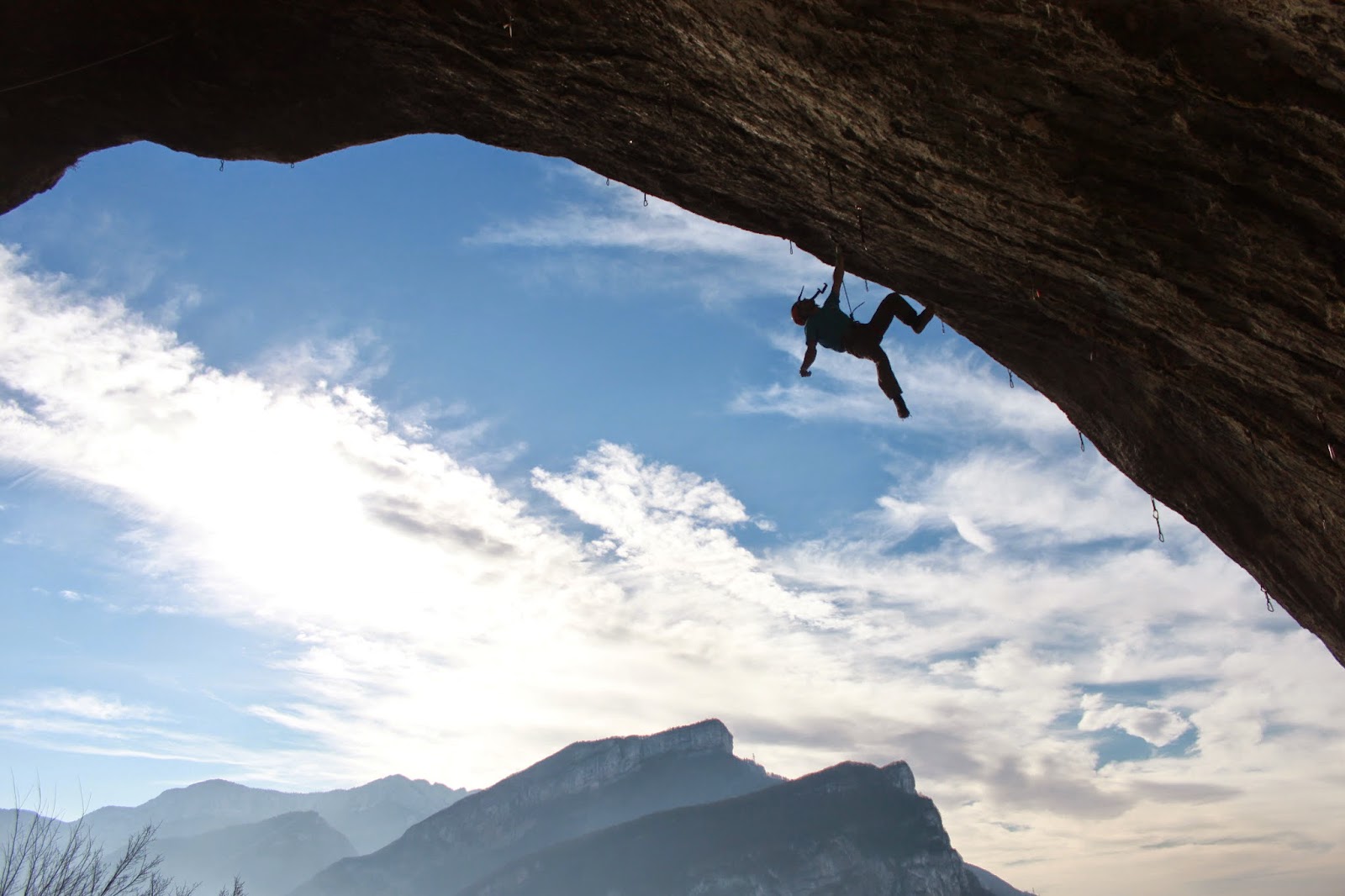 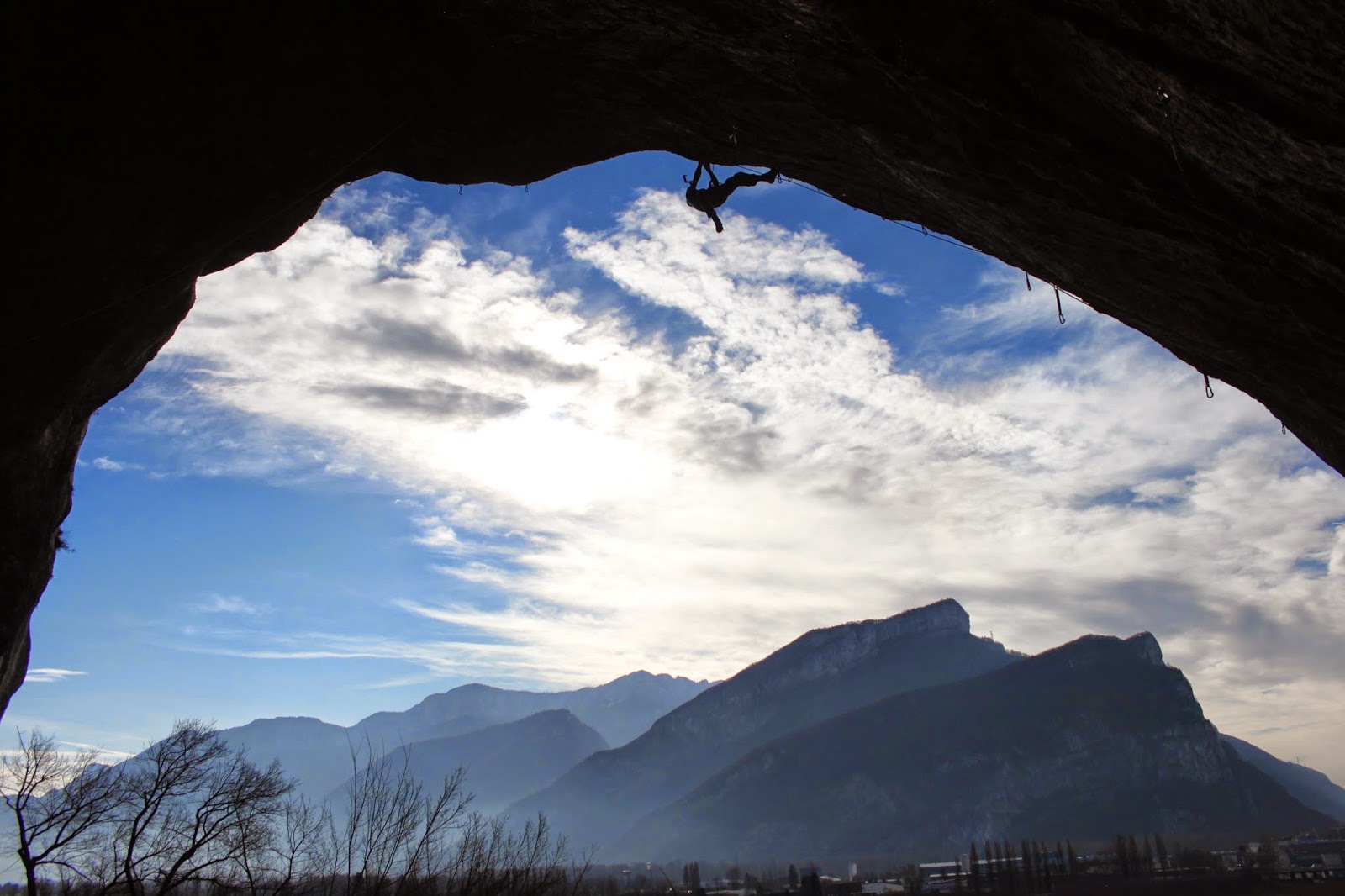 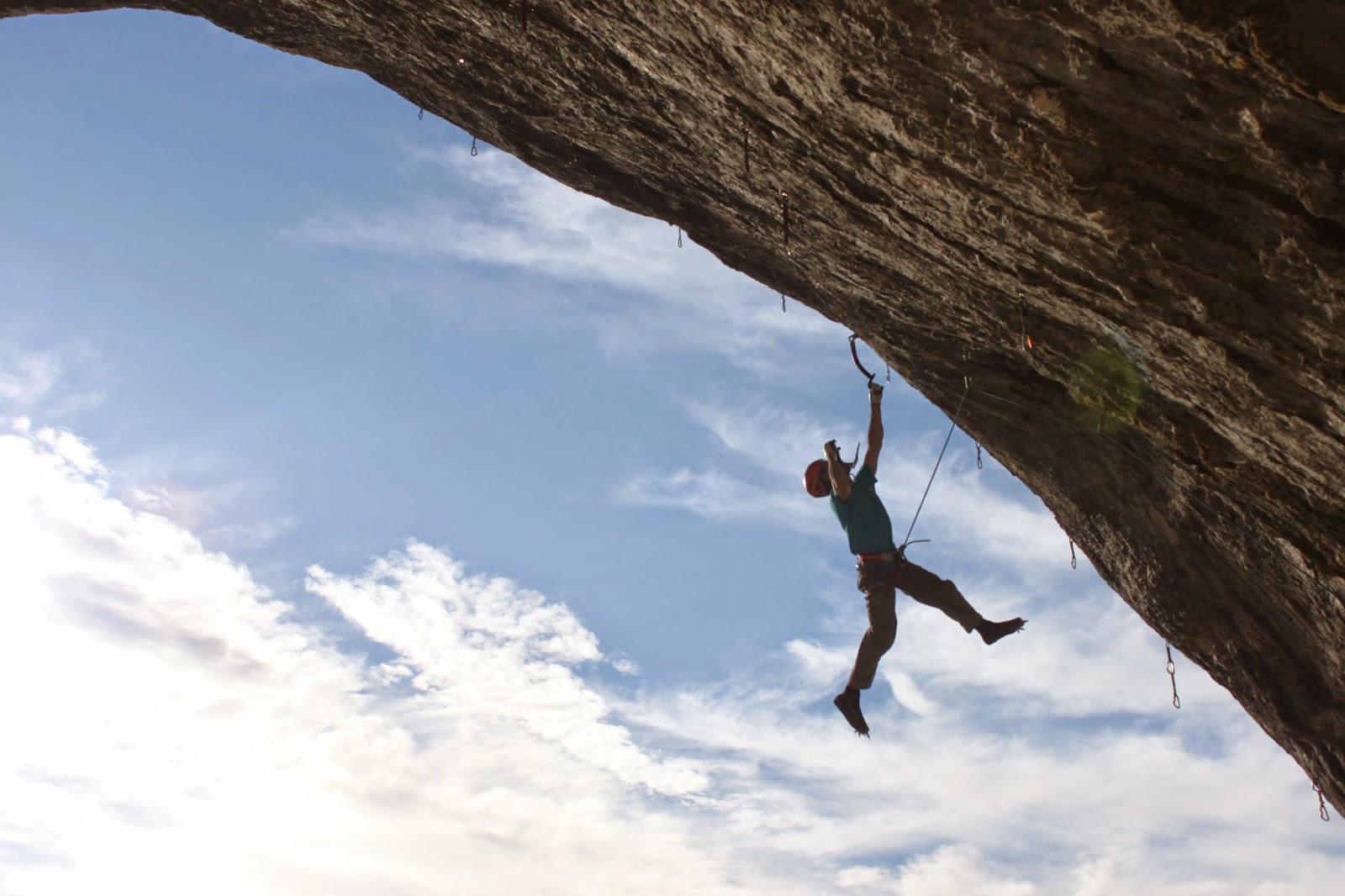 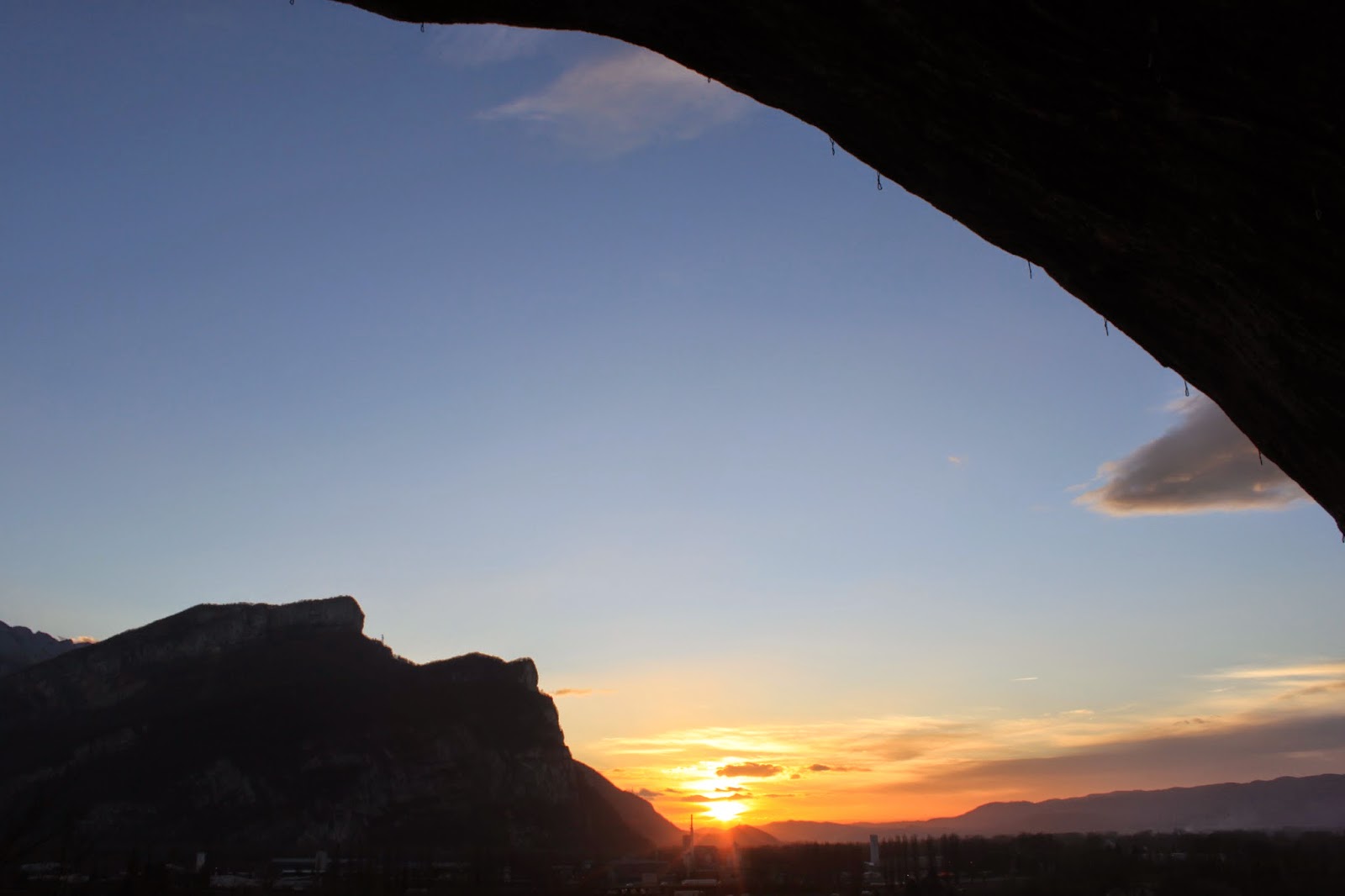 Over the weekend we went to Saas Fee Switzerland for the Youth World Championship. I didn't climb, but watched two young Canadians compete against others their age. After the youth competition we went back to France for two days. The plan was to climb at Usine again but I came down with the flu and was way to sick to go climbing. I have been trying to recover as quickly as possible because we are now back in Saas Fee for the World Cup which starts Friday. 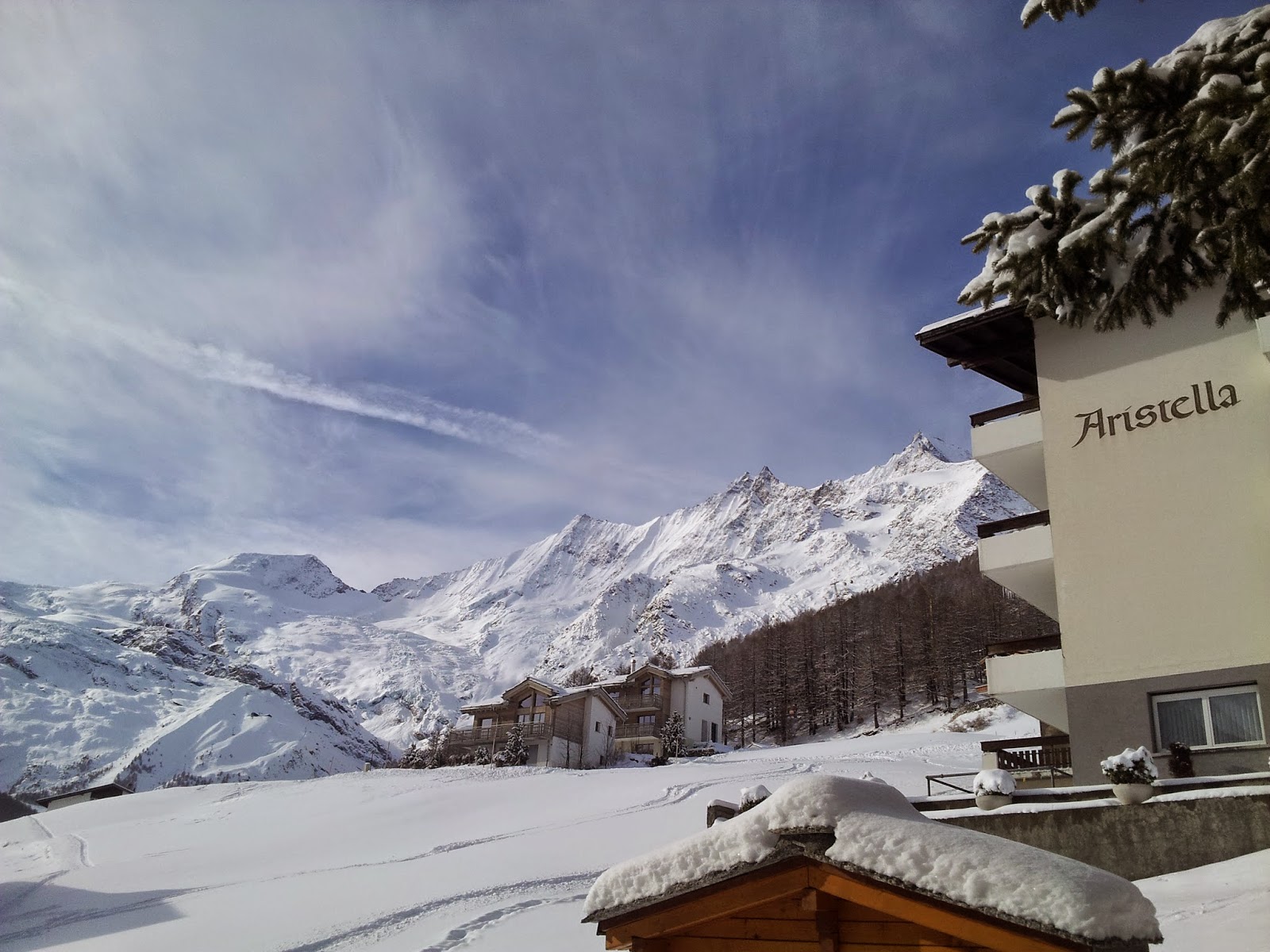